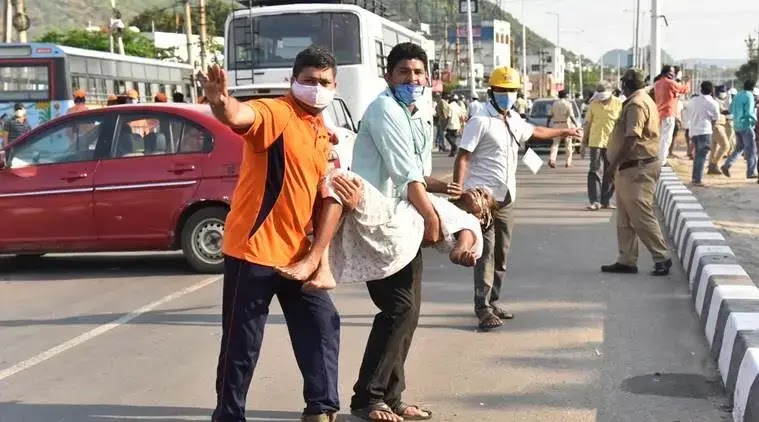 Expressing sorrow over the incident, President Ramnath Kovind said that, I am saddened by the news of the leakage of gas at a plant near Visakhapatnam which took many lives.

RR of Visakhapatnam In the Venkatapuram village around 11:30 am, 11 people, including a child, died due to gas leaking in a pharma company plant, while the condition of 100 people remains critical. Counting More than 1000 people have been admitted to the hospital. This gas leak has affected the area of 3 km. As a precautionary 6 villages have been superseded. This incident reminded me of the gas tragedy in Bhopal.

Expressing mourning over the incident, President Ramnath Kovind said, 'I am saddened by the news of the leakage of gas at a plant near Visakhapatnam which has killed many people. My mournings to the families of the victims. I pray for the realization of the injured and for the safety of all.

On the other hand, about the situation, PM Narendra Modi, CM of Andhra Pradesh Y.S. Have a conversation with Jaganmohan Reddy. He assured the Chief Minister of all help.

The PM tweeted and said, 'Talked to the officials of MHA and NDMA about the situation in Visakhapatnam. The situation is being closely monitored.

Manifesting sorrow over the incident, Home Minister Amit Shah said that the incident in Visakhapatnam is disturbing. I talked to NDMA officials and concerned officials. We are perennially and closely monitoring the situation. I wish for the people of Visakhapatnam to get well soon.

Telangana Chief Minister K Chandrasekhar Rao opened up grief over the incident and said that it was an unfortunate incident. He articulated condolences to the families of the dead and said that he wished the injured to recover soon.

Congress leader Rahul Gandhi tweeted and said, I am shocked to hear about the gas leak incident in Visakhapatnam. I request to Congress workers and leaders in the area to provide all essential help to the affected people. My mourning to the family of the victims.

RR of Visakhapatnam, Andhra Pradesh At least 11 people have died on Thursday after leaking chemical gas from a plant in Venkatapuram village. is. 10 lakh rupees will be given to all those who are being treated on a ventilator due to the gas scandal. Apart from this, other people who have been admitted to the hospital but are not on a ventilator will be given Rs 1 lakh each.

As per the news agency ANI, more than a thousand people have declared themselves unwell after this incident. As per the Speaking to news agency ANI, Visakhapatnam District Medical and Health Officer Tirumala Rao said, 300 people have been admitted to several hospitals due to gas leaks in Visakhapatnam. After this incident, the National Human Rights Commission has shown strictness and sent a notice to the Central and State Government seeking answers.

Chief Minister of Andhra Pradesh Jagan Mohan Reddy himself went to King George Hospital to know the condition of the victims of the gas tragedy. Officials said that the plant is located in the Gopalapatnam area. People of this area reported burning sensation in the eyes, difficulty in breathing, nausea, and a red rash on the body. PM Modi is also monitoring this matter. PM Modi has spoken to the state Chief Minister Jagan Mohan Reddy and convinced him of all possible help. So let's know all the updates on the gas leak scandal.


NDRF Director General SS Pradhan said, "It has been reported that the death toll in Visakhapatnam a gas case has increased to 10 now."

Andhra Pradesh Chief Minister Jaganmohan Reddy has left for Visakhapatnam. He will also go to King George Hospital, where people affected by poisonous gas are being treated.

The lockdown process started immediately after the Andhra Pradesh minister MG Reddy reported a gas leak at the factory. The local administration was immediately informed. The gas was immediately neutralized into a harmless liquid form. But some of the gas got out of the factory premises and reached nearby areas, affecting the people.

He said that the company that was leading it should be responsible for the incident. They have to come onward and tell us which protocols were followed and which were not followed. Then criminal action will be taken against them accordingly.

DG SN of NDRF Pradhan said that the incident in Visakhapatnam is an incident of styrene gas leakage, which is the raw material for plastics. This factory was open after lockdown, it seems that gas has leaked in order to restart. Nearby villages have been affected.

Amit Shah tweeted, 'Visakhapatnam incident is disturbing. I have spoken to NDMA and other concerned officials. We are constantly keeping a close watch on the situation. I pray for the skill of the people of Visakhapatnam. '

Defense Minister Rajnath Singh has expressed grief over the deaths of people in a gas leak incident in Visakhapatnam, Andhra Pradesh. He tweeted, 'Sad news has come from Visakhapatnam. Due to this tragic incident, there is a lot of sadness due to the death of people there. My sorrow to the families of the dead people. I wish the people of Visakhapatnam safety and efficiency. '

Madhya Pradesh Chief Minister Shivraj Singh Chauhan expressed grief over the untimely death of some people, describing the gas leak incident in Visakhapatnam in Andhra Pradesh as extremely painful. Chauhan said in a tweet, 'The news of many precious lives being untimely rushed and unhealthy due to the leaking of poisonous gas in a chemical plant in Visakhapatnam is extremely sad. I pray to God for the peace of departed souls and to support family members and for the quick recovery of the injured.

Prime Minister Narendra Modi has spoken to CM Jaganmohan Reddy over the phone and expressed confidence in his help.

Prime Minister Narendra Modi has called a meeting of the National Disaster Management Authority (NDMA) on Thursday in view of the situation arising out of gas leaking from a chemical plant in Visakhapatnam on Thursday.